Olga Semenova – Director of the Library

The Scientific Library was established at the same time as the Institute itself - in April 1923. It was founded by Yuliya P. Traube-Maslakovec, a person of deep expertise who mastered several foreign languages perfectly. The library's archive base was composed of books received from the Second Leningrad Bacteriological Laboratory.

During the first years of existence the Library created a descriptive subject catalogue. Based on the system of headings of this catalogue, a fundamental work was prepared: index of bibliographic references for bacillary dysentery between 1900 and 1938. 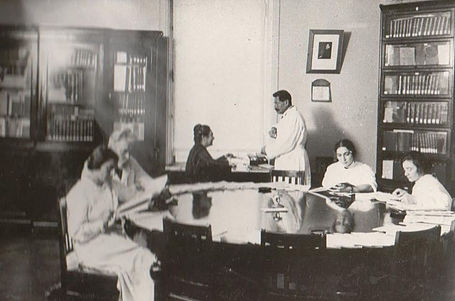 Since 1925 the Institute began publishing The Journal of Microbiology which, as well as The Collected Papers of Pasteur Institute published since 1935, constituted the gold pool of the Library. Since then, the Scientific Library started exchanging periodicals with the libraries of Austria, Algeria, Italy, Spain, Palestine, Romania, Tunisia, France, Japan and many others. The library acquired extremely rare periodicals, which became available, through an interlibrary loan system, to scientific libraries throughout the city. The Scientific Library of the Pasteur Institute became a full and effective member of the Association of Medical Libraries of the city of Leningrad.

By the beginning of the Second World War the bibliographic catalogue index had been considerably improved and completed, it included 8137 bibliographical units, and specifically 5954 books and magazines and 2183 booklets (essentially reprints from foreign magazines). The Scientific Library, as well as Pasteur Institute, did not interrupt its work during the whole period of the Siege of Leningrad. Despite the outstanding severities of war time, the Library's collections were enriched with 156 books and 85 booklets in three years. All the reference works and the source of pride of the Library - the descriptive subject catalogue - were evacuated to Saratov and returned to the Institute in full integrity in 1944.

In the post-war years the Scientific Library continued to develop its collection with works in microbiology, virology, epidemiology, immunology and related sciences. New indexes were formed, the old inventories were enriched.

At present, the alphabetical and subject catalogues are constantly maintained and renewed, catalogues of Russian and foreign journals, didactic files, works of the Institute's employees: analytical reviews, manuals for physicians etc. are filled.

The updating of the collection follows the ongoing acquisitions: by subscribing to Russian scientific reviews, performance-based acquisitions of new scientific works. The collections of the Library are enriched in a dynamic way by new works thanks to the many donations from the colleagues of the Russian medical institutions.

Library collections can be consulted freely. Today the scientific and informational potential of the Library is over 63,000 units. These are scientific editions in Russian and foreign languages, abstracts of theses, theses etc. An important part of the collection is dedicated to periodicals. Several medical reviews are kept in series since the very first edition. Since 2011 the archives of the Library regularly receive the proprietary edition of the Institute - The Infection and Immunity review.

The Library ensures readers' access to the Russian and international biomedical networks through electronic source.